Hey, how are you doing? (: Since there was a week between the end of the GSoC and the start of my studies, I decided to do some hobby hacking.
I have some remote (50 km away) appliances (electric heater) that I would like to control from wherever I am. The SMS service is a very compelling solution for this kind of problem. The main challenge is to figure out how to make a mobile phone to a relay that can switch on and off things.

I found a nice tutorial here which tells how to control a 12V car relay with a vibrator signal from the phone (no firmware modification is involved there). This gave me a good jump start. I picked up my old Nokia 3310 for this job. One nice thing about this phone is that it has a thermometer that is mounted in the battery (only original batteries have these). The thermometer will tell what is the current temperature around the phone. The phone will use this information to decide whether to turn on or off the heater in order to keep the same temperature in the room. SMS messages will be used to notify me if something goes wrong or to change the preferred temperature. This can be used during winters when you want to preheat the place before arriving there. Another advantage of this phone is that there is a marvellous open source tool called NokiX, that allows to modify phone's original firmware.

First of all I modified the phone's F/W which turns vibra on and off according to the environment and preferred temperature. You develop these patches using C or Rexx. There is quite a lot phone functionality exposed already. My application does the following things:


After that came the hardware part. 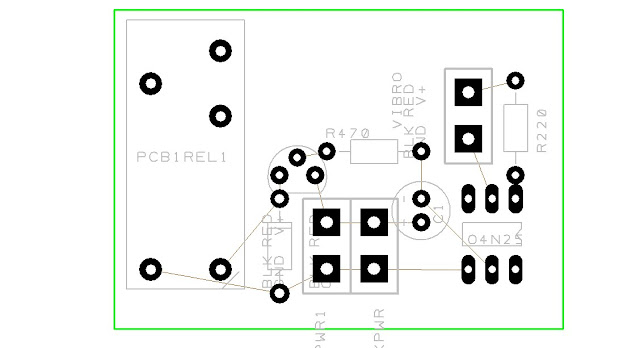 Don't mind the labels in the picture above. I wanted to place all the components in a quite an optimal way, so I created a PCB design first. It is quite compact but I still could not get rid of one wire going on the non-component side of the PCB. 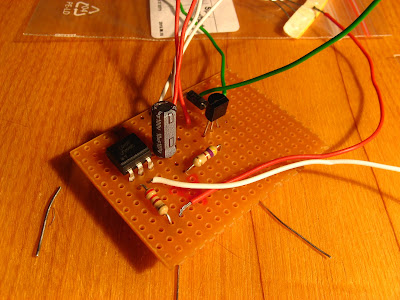 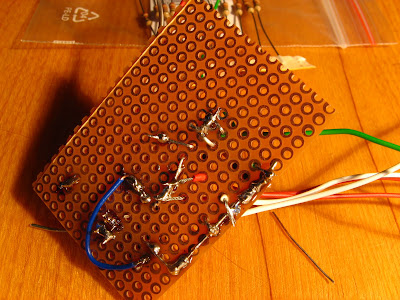 You can notice a misturned transistor in the pictures above. Thankfully my dad noticed it before I plugged this thing on. After I completed soldering this board a time came for the modification of my good old Nokia 3310. What I needed to do was just take that mobile phone apart, take that vibra motor away and solder two wires in its place. 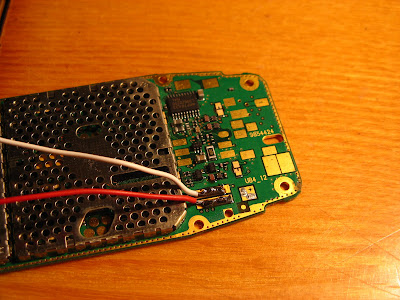 Then I needed to make a little hole in the plastic frame so these two wires can get out. I did all of this following pictures from the link mentioned in the beginning of this post. After I put everything back together I measured the voltage of the vibra motor. According to the site it should be around 3.75, and so it was.
So far so good. But there was one problem when I connected the phone, power supply and relay to the board. Relay was always on disregarding the vibra power of the phone. I measured the voltage on the relay and it gave me 6V when vibra was completely turned off. Well I am not that good in radioelectronics so I asked my dad for some help while debugging the situation.

This left us with a working bunch of wires and components on the board. Tomorrow I will try to put everything into a nice box. See you then.
Posted by Martynas at Thursday, August 26, 2010 No comments:

well it has come to the end. This is my last GSoC 2010 weekly report. First of all I would like to say that it was an unbelievable experience to work whole summer on the open source project such as phpMyAdmin.

Well talking about my initial proposal to phpMyAdmin not everything that was written there is implemented. Two out of the three main goals are completed. Now any user can see and create charts out of their data and I believe that I did quite a good job giving future developers a way to expand chart implementation with different chart renderers.

One thing that was in my proposal and I left it out is JS chart implementation. I dropped it because image charts looked so nice and I was able to add some interactivity (tooltips) to them which are probably the most used feature of JS charts.

I spent the last week rewriting comments so that phpdoc can understand them. I also added some documentation and linked wiki to the FAQ section of the documentation. So any user that has a problem while drawing a chart can seek help there.

Well I haven't had a blog before GSoC, but I will try to keep on posting what is happening around me. See you some time later!
Posted by Martynas at Sunday, August 15, 2010 No comments:

well not much code was added this week. However I have tried to install my PMA fork to as many machines with as many configurations as possible. By doing so, I have found few bugs and made some fixes which will help with the compatibility.

Who would have ever thought that I would find a machine with no JSON capability. After this not usual encounter I added check for JSON functions and if there are not any, then tooltips are disabled.

Next week is the last week of GSoC and I will work on documentation, more testing and fixing bugs if any.
Posted by Martynas at Sunday, August 08, 2010 No comments: